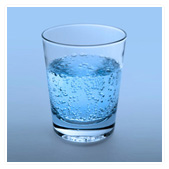 At the facility of GDG in Kemerhisar / NİĞDE the carbon dioxide gas (CO2) is liquefied and being distributed. Carbon dioxide gas is exerted naturally and nearly at 100% purity by drilling from the fault cracks 300-500 meters underground and delivered to the facility by polyethylene pipe line system. As a result of exerting the CO2 gas, the oxygen level in the ground increases and the areas in which the gas is exerted become green, lands convenient to planting occur and damps become dry.

OUR CAPACİTY The built power of our facility in Kemerhisar / NİĞDE is 5000 kg/hour, our stocking capacity is 500 tons. The CO2 produced in our facility has a purity above the standards or TSE and Food Production Standards and it is the purest Carbon Dioxide Gas (99.999%) in Turkey. Our company gives agencies to the to the companies which have an annual consuming capacity of at least 120 tons in and outside the country. The selection of the agencies which present our company is made with care to provide the final customer appreciation. Storage tanks of different capacities are given by our company to our agencies and directly to our customers for rent.

To use the carbon dioxide produced from chimney gas in food and drug industry is forbidden by law in our country in 1990s because inside it has sulfur compounds, aromatic compounds, and compounds like benzene which have cancer effect.


THE PLACE OF CARBON DIOXIDE GAS IN OUR LIFE

• As an inert coverer in metal welding
• At the precipitation of the salts like ammonium bicarbonate, potassium bicarbonate, calcium carbonate; at penicillin production; as an acid to regulate the pH value
Iron packaging, hardening the crucible surfaces
• At organic agriculture and greenhouses
• At cement improvement
• As a fertilizer
• At air beds
• At swelling of lifeguard boats, as torpedo pusher
• At mines as exploder, at cooling of exploder materials
• In aerosols and fire extinguisher tubes, at fire extinguisher systems
• At transferring of dangerous liquids
• At extraction of petrol
• In drinks like barrel beer, cola and mineral water
• Storage and keeping of frozen food, fruits, vegetables and flowers
• To preserve the freshness in substances which can spoil easily
• At the production of ice cream, milk and butter

MATTERS TO BE TAKEN INTO CONSIDERATION 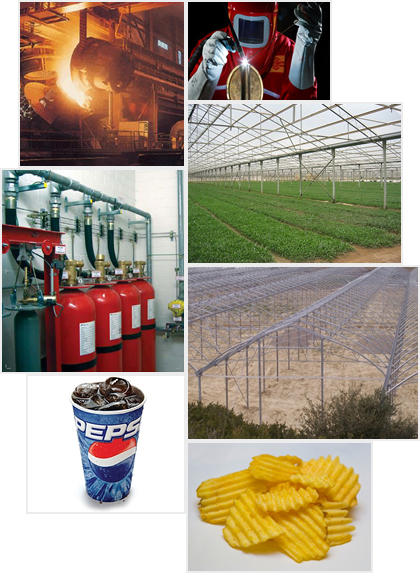